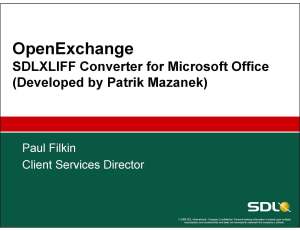 Some people have asked me for more info about the SDLXLIFF Converter tool and how it’s used. I had received good instructions from Paul Filkin at SDL for an earlier version some time ago, so I’m sharing them here with his permission. You can download them from here.

By the way, remember also to download and install the Open XML SDK 2.0 application mentioned on the SDLXLIFF Converter page (under Technical Requirements). There are two files on the site, and this is the smaller one of the two (3.8 MB). Without it, the tool doesn’t work and you get an error “Could not load file or assembly ‘DocumentFormat.OpenXml, Version=…” etc. etc. when trying to use the converter – or at least that’s what happened to me when I tried it.

I often hear from translators that they don’t use Studio because their clients don’t have it. That can certainly be problematic but it doesn’t automatically mean that you can’t use Studio when working with non-Studio clients. I wanted to briefly review the options here because I’ve recently met several translators who seem to be unaware of how they can use Studio in situations like these. Also, the new SDL XLIFF Converter offers us an additional solution to this problem.

So here are the options for the different scenarios where the client does not use Studio:

1. Client wants back the translated target file and the TM

No problem. Translate the file in Studio and create the target file. To create the TM, requires several steps and a fair amount of clicking but it’s easy and quick after you have done it a few times: 1) Create a new TM in Studio, 2) Import the translated, finalized SDLXLIFF file to the new TM, and 3) Export the TM in TMX format. Send the translated file and the exported TMX memory file to the client.

No problem. You can open TagEditor (TTX) files directly in Studio and then save your translation as a TTX file after the translation is done. If the client didn’t send you the source file in TTX format, open it in TagEditor and save it as a bilingual TTX file, and then open the TTX file in Studio. You can also save the translation in the original file format (such as Excel or PowerPoint) if you have the original file available. There’s usually no need to send the TM to the client because they can create it from the translated TTX file. More details about working with TTX files can be found here (online Help) and in the TTX Compatibility Guide for SDL Trados Studio 2009 Users white paper by SDL.

By the way, all the above also applies to SDLX ITD files.

This can be a problem because Studio can not create bilingual Word files, as we all should know by now. Hopefully, this will change in future but for now we don’t have that option.

a. Uncleaned file not needed after all

Ask the client first whether they really need the uncleaned file and wouldn’t be happy with just the translated file and the TM. I’ve actually started asking this, and some clients have said that it’s OK, they don’t actually need it. If so, problem solved and proceed with scenario 1 above.

b. Maybe a TagEditor file would be OK

Your client might also be OK with a TagEditor file. Again, problem solved — just create a TTX file in TagEditor and translate that in Studio (scenario 2 above).

If the client needs the uncleaned Word file for editing/review purposes, for example to provide editor feedback (tracked changes) to the translator, maybe they are willing to use the bilingual Word table that you can create with the new SDLXLIFF Converter. The editor can mark the changes to the bilingual table using track changes and comments functions in Word, and you can then easily accept or reject the changes in Word, update your SDLXLIFF file by importing the updated Word table to Studio, and then create the final target translation and TM for the client. More info about SDLXLIFF Converter can be found in this posting.

Even if you have tried to convince your client to accept one of the above solutions, they might still see the uncleaned Word file as the only acceptable file format for them, and can certainly have valid reasons for that. So, what to do? You have two options: 1) Give up and translate the file in Word using Trados Workbench, or 2) Translate the file first in Studio and then again with Workbench utilizing the project/file-specific TM from Studio. The latter option is not actually as crazy as it may sound at first. It really depends on how much more you prefer Studio and benefit from translating in Studio compared to Workbench, but it also depends on the file in question. If everything goes well, the retranslation goes very quickly and more or less automatically since every segment should be a 100% match. However, there are certain things that can slow down the retranslation, such as formatting and segmentation rule differences. Anyhow, that’s a good topic by itself, and I will talk more about it next time.

Excellent… I have been touting this tool in a couple of my earlier postings and I think it’s one of the best new features in Studio. It allows you to export a translated bilingual SDLXLIFF file as a bilingual DOCX file (in a table format), edit (incl. spell check) the file in Word, and then import the file back to the original SDLXLIFF file. This will then update the SDLXLIFF  file so that it reflects all the changes made in Word (incl. added comments). Now the tool is finally available through the SDL OpenExchange program together with some other new applications. You can download it free from here.

I certainly recommend trying it out. It will make it much easier to work with editors who don’t have Studio and to use Studio in projects that require the use of Word’s tracked changes function. In addition, it will help those of us who don’t have a functioning spell checker in Studio for their languages, such as Finnish and many Spanish variants.

Anyhow, I have one improvement suggestion. It would great if it updated the segment status selectively so that all changed segments would have a different status (such as Draft) after the file has been imported back to Studio. Now it either changes the status of all imported segments (if you select the Update segment status option) or none of them.  That would make it easy to locate the changed segments in the SDLXLIFF file after reimporting, if needed. It’s possible to manually select which segments to import, but that’s not very feasible solution if you have a big file or you are using Word’s spell checker, because you would have to stop at every changed segment to select it.

By the way, if you wonder where it ended up after installation, look under All Programs > SDL > OpenExchange Apps.